This movie has been called the movie of the year and movie of the decade!
Publicado por proyecto-web en 7:16 No hay comentarios: 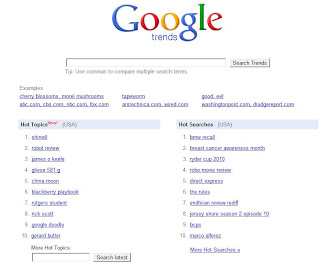 Well im kick starting this blog with the google trends of today October 1st of this good year 2010. So what was people searching for in google today? Lets See...
People want to know about this new indian movie coming out "robot" also about that one planet that can possibly have some sort of life in it this "gliese 581 g" it sounds like a vitamin to me but well its a planet, some more searches about this gay-hating-videotape-party-stalking lawyer dude that might be in jeopardy of losing his job.
Frankly I dont support what this Shirvell dude did but hey man hi is in his right to express himself if he wants specially if he is home over the intenet, is a free country after all.
Well to other things, china is about to launch its 2nd moon mission (that we know about of course) they sent an unmmaned human probe that is part of a 3 step moon mission culmination on the soft landing of the probe according to reports. China is the 3rd country after Russia and the United State to send a human to the space back in 2003 and a person to the moon back in 2008.
Another trend that is popping up is about this new Blackberry Playbook thing that looks like blackberry's answer to the apples ipad.

The CPU on this device is a 1GHz processor and this is matched by 1GB RAM. In addition to the multi-touch capacitive LCD display screen, there is also wireless 802.11 a/b/g/n network support, video conferencing support by way of a pair of HD cameras (3MP front facing, 5MP rear facing), 1080p HD video playback, a microUSB connector and complete support for the HTML 5 and Adobe Flash 10.1.

What I like about it is that it supports Flash and that one thing the ipad fails to do.
Publicado por proyecto-web en 6:11 No hay comentarios: